No Rest During Hibernation! This keeps a Winemaker Busy in Winter 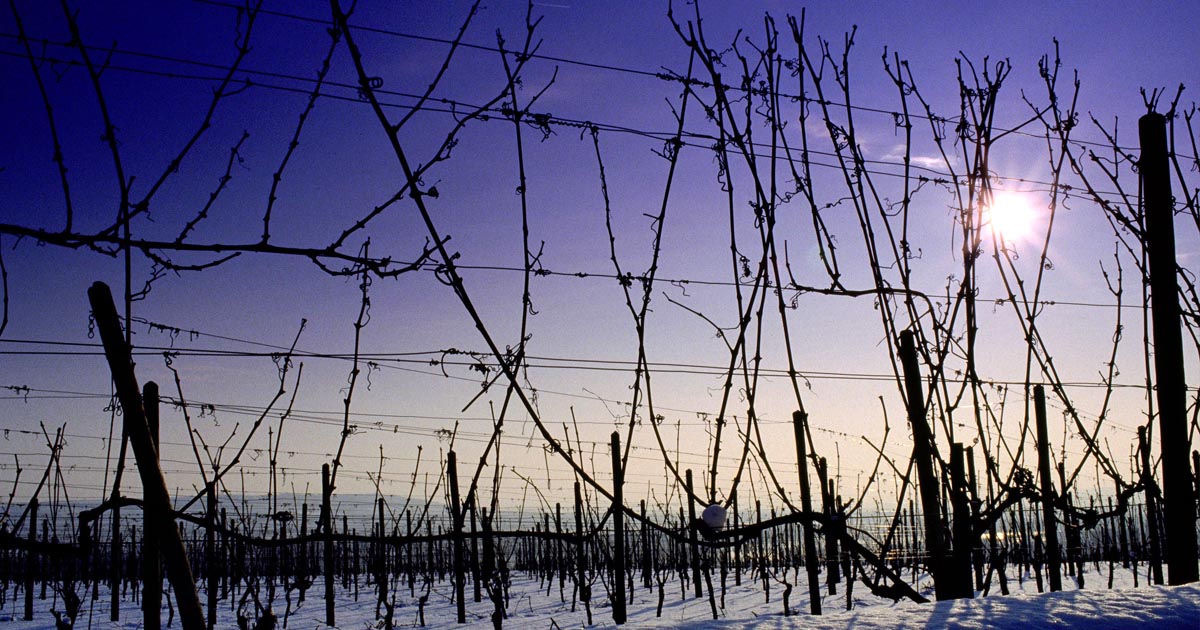 The grape harvest has long since ended. The must in the cellar is well on its way to developing into what we hope will be a magnificent young wine.  The last leaf has long since fallen to the ground in the vineyard, and the days have been getting a little longer since the winter solstice. Now would actually be the time for the winemaker to finally put up his feet with relish. But far from it – from November to March there is a lot of work to be done. The three pillars of winemaking are wine cellar, vineyard, pruning.

It’s fermenting in the wine cellar

The process, that turns the must into young wine, takes place as desired In the wine cellar. The grape juice ferments, rests and matures in tanks and barrels – and as is the case during puberty, you don’t really know what the end result will be. The young wine therefore requires frequent attention: the winemaker controls the temperature and yeast, and in between there are repeated tastings to follow the development. What tastes tart and unround to the layman now allows the winemaker to recognize the character and taste of the finished wine. Before the big moment of bottling, however, there is still the withdrawal of the yeast and the clarification of the cloudy wine on the winter schedule.

Young wild ones and old acquaintances in the vineyard

Even if old vines are valued today because of the high quality of their grapes, at some point the winegrower has to say goodbye to the old vines that have been cared for for decades. With a little nostalgia, the wire frames and posts are then removed and the vines, which are up to a hundred years old, are pulled out of the ground. If new vines are to grow in this place, the soil must now be thoroughly and deeply loosened to enable successful new planting in spring. With “Rigolen” the soil is dug up to a depth of 60 centimeters with mechanical support. Even in existing vineyards, digging or cultivating is a recurring winter theme.

It goes without saying that the vines draw a lot of nutrients from the soil over the course of the year. That is why fertilization is also necessary in winter so that the grapes can develop healthily and lushly next summer. Many winegrowers apply natural compost, preferably horse and chicken manure. The cut rods are chopped up and also planted in the ground. This organic fertilizer not only provides the vines with the necessary nutrition, but also promotes soil vitality and thus biodiversity in the vineyard. In addition, the applied biomass increases the water holding capacity of the soil and thus effectively prevents erosion – a topic that not only concerns winegrowers on steep slopes.

Before pruning, the winegrower must consider: How high should the yield be in the coming year? What quality should the wine made from the grapes have? What is the location of the vineyard? These and many other considerations flow into the planning of the pruning. The winegrower can start cutting at any time after the leaves have fallen off and the rods have become lignified, i.e. the sap has become dormant. The one-year-old rods, on which the buds (eyes) for the next year have already formed, are pruned between November and March. Incidentally, the one-year-old rods arise from two-year-old shoots that have grown from at least three-year-old wood.

One cut variant for everyone? Never!

When pruning the vines, the winegrower also takes into account that there are strong-growing and rather “shy” grape varieties. Some fruit best on the short-cut supporting wood, the so-called cone, which is well equipped with two eyes. A bow vine, on the other hand, can also have up to twelve eyes. This explains, among other things, the very different appearance of vineyards: If only one shoot grows upwards on a (young) vine, you may see two arches fixed to the wire a few hundred meters away, next to them towering vines on one vine tied as an arch – or something that looks like an inverted broom and presents multiple rods in parallel. In addition to the grape variety, location, altitude, soil, water availability and planned yield always count. Interesting: Until the 1930s, there were different cut variants in every wine-growing region. The trend towards standardizing pruning has only been around for about 100 years.

What makes the cutting work, which lasts several months, easier today is the targeted use of technology. The rods are often shortened by machine, but afterwards the pruning is still done by hand. Cordless scissors are helpful here, as they make cutting the often very woody rods much easier and is easier on the joints. The importance of pruning for the wine quality of the next vintage can be measured by the fact that many winegrowers insist on doing this work themselves.

If the winter work should be over at some point, a winegrower likes to put up his feet, enjoy the fruits of his labor in a glass and chat a little from the vineyard school. Are you dying to find out more now? On a WINE TOUR you will hear interesting details first-hand and taste the best wines in a personal atmosphere!